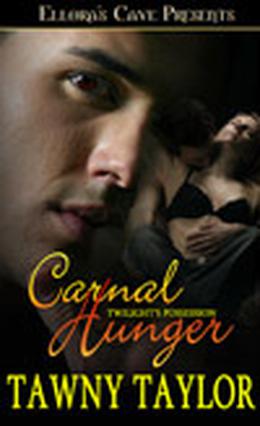 Carnal Hunger Tawny Taylor " Book 2 in the Twilight's Possession series." Jasmyne Vaughn's search for her drug-addicted mother-and the package she stole -was a nightmare in more ways than one. Jasmyn's plans had not included being kidnapped by two powerful vampires driven by the Hunger and the primal, carnal need to sate the blood-bond between themselves and a mortal woman. Sons of the Twilight Asher and Draven have their own problems. Asher is desperate to reclaim what's been taken from him. And Draven has learned his conflicting loyalties are going to cost a number of people a dear price. But the desperate effects of the Hunger have driven them both to near death-until Jasmyne completes their bond. Propelled by honor, duty and love, the three spend their nights searching for Jasmyne's mother and the ancient Greek relic she's stolen. And days sating their unrelenting carnal need for each other. Two men, one woman-and a driving sexual hunger that none can resist-in a race against time to save the innocent.or destroy themselves. "Reader Advisory: While Carnal Hunger can be enjoyed as a stand-alone novel, readers may enjoy it more having read the earlier story. Book contains some scenes of male-male sex."
more
Amazon Other stores
Bookmark  Rate:

'Carnal Hunger' is tagged as: