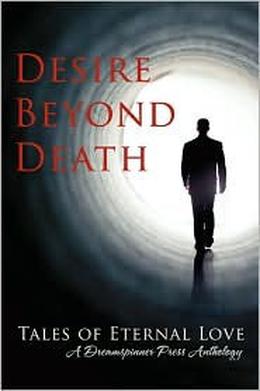 Five novella length tales of love that overcomes all obstacles - even death.

Ink: The Tale of a Vampire in Melbourne by Isabelle Rowan
After too long alone, Dominic enters a tattoo parlor, desperate to find a way to reconnect to life. He meets Michael, an artist who evokes feelings and needs Dominic knows are dangerous. But those emotions and the allure of the handsome human intoxicate Dominic as much as the blood that keeps him alive, and he finds that he - usually the hunter - just can't resist giving in to his prey.

After the Storm by Chrissy Munder
Angry and frustrated with his chronic illness, Vincent Poulsen moves into an old lighthouse to live out the few days he has left. After a dangerous collapse, he meets the ghostly Captain Cason, who shares stories of his distant past. I n the process, Vincent stumbles over the tragedy that binds the captain to the lighthouse and his haunted memories. Then fate offers them both a chance to change the future. for better or for worse.

Revenant by Connie Bailey
When Bo Andressen and his salvage crew contract a job in a crumbling castle, they walk into a mystery of murder, intrigue, hidden treasure and greed that has its roots in the far past. Ghosts are only the first suspected danger - the crew, local constable Gavin Gilroy, castle owner Sir Rhys Turcotte and psychic Tristan Andrews have to find out who of a more earthly nature is involved, before more people fall victim to an ancient spectre who seeks to rejoin and conquer the mortal world.

Seeing Is Believing by Abigail Roux
Scott Cunningham has a ghost problem, a problem that requires a specialized touch. Enter Zacharias, Leo, and Andy - professionals, if you will - in solving said problems. But solutions don't always come easy, and if Zacharias and his crew can't get the job done, someone innocent might get hurt.

Bittersweet by Madeleine Urban
His business failing and his marriage floundering, Harrison Holden is falling apart. To make things worse, he wakes one morning to see Piers Claybrook, a man he rescued after a car crash the night before, standing in front of him - the same Piers he'd seen dead in the hospital. Now a ghost, Piers believes he's with Harrison to make a difference in the other man's life, and it's up to the two of them to find the key to living - and dying - and how to walk the line in between without being separated by it.

'Desire Beyond Death: Tales of Eternal Love' is tagged as:

Similar books to 'Desire Beyond Death: Tales of Eternal Love'

Buy 'Desire Beyond Death: Tales of Eternal Love' from the following stores: