The Omen Machine (Sword of Truth #12) 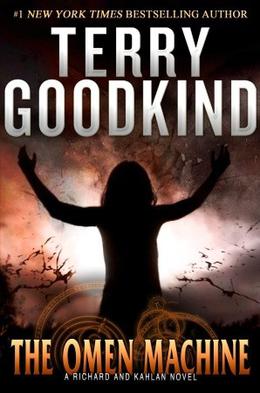 Hannis Arc, working on the tapestry of lines linking constellations of elements that constituted the language of Creation recorded on the ancient Cerulean scroll spread out among the clutter on his desk, was not surprised to see the seven etherial forms billow into the room like acrid smoke driven on a breath of bitter breeze. Like an otherworldly collection of spectral shapes seemingly carried on random eddies of air, they wandered in a loose clutch among the still and silent mounted bears and beasts rising up on their stands, the small forest of stone pedestals holding massive books of recorded prophecy, and the evenly spaced display cases of oddities, their glass reflecting the firelight from the massive hearth at the side of the room.

Since the seven rarely used doors, the shutters on the windows down on the ground level several stories below stood open as a fearless show of invitation. Though they frequently chose to use windows, they didn’t actually need the windows any more than they needed the doors. They could seep through any opening, any crack, like vapor rising in the early morning from the stretches of stagnant water that lay in dark swaths through the peat barrens.

The open shutters were meant to be a declaration for all to see, including the seven, that Hannis Arc feared nothing.

#1 New York Times-bestselling author Terry Goodkind returns to the lives of Richard Rahl and Kahlan Amnell—in a compelling tale of a new and sinister threat to their world.

In addition to concluding the Sword of Truth series, The Omen Machine also launches the new series of "Richard and Kahlan."
more
Amazon Other stores
Bookmark  Rate:

'The Omen Machine' is tagged as:

The 'Sword of Truth' series

Similar books to 'The Omen Machine'

All books by Terry Goodkind  ❯

Buy 'The Omen Machine' from the following stores: