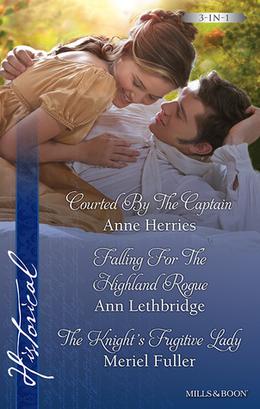 Courted By The Captain - Anne Herries

With a title to pass on and an estate in ruins, Captain Adam Miller must marry well and produce an heir to turn the family fortunes around. Yet despite the eligible heiresses, none can compare to the exquisite but penniless Jenny Hastings.

Jenny is swept off her feet by the Captain. But she has secrets which could change everything.  When they come to light, will the Captain still want her by his side?

Whisky runner Logan lives outside the law. But Charity may be his most dangerous challenge yet.  He’ll do anything to save her, even face her inevitable betrayal...

Runaway lady Katerina of Dauntsey has disguised herself among a dance troupe. But when her act attracts the attention of Queen Isabella, Katerina's past catches up.

Lussac de Belbigny can't help but admire the flame-haired acrobat's courage. A knight in the Queen's rebel army, Lussac will let nothing threaten his iron-clad self-control. Yet something about the mysterious Katerina touches his damaged heart...

Buy 'Courted by the Captain / Falling for the Highland Rogue / The Knight's Fugitive Lady' from the following stores: