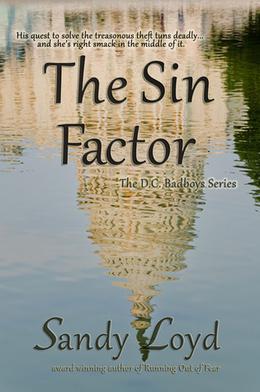 The world is changing. No longer black and white. The men we expect to be heroes aren’t so heroic anymore. And those thought to have no heroics surprise the hell out of us.

The Sin Factor is a story about perceptions, misconceptions, and what can happen when those who misconceive, abuse their power. In short—-a few good men gone wild.

When Jeffrey Sinclair is forced to unravel the puzzle of who is stealing from his company and why, he gets caught up in a deadly game, one perpetrated by those who’ve vowed to protect our freedom. He and his colleagues infiltrate the life of the one person they feel is the link to solving the mystery, Avery Montgomery. Avery is the widow of the last known person to have their devices in his possession before he died.

Avery is a woman heroes marry and protect for life, and Sin’s never been the protecting, hero type, not like her dead husband was. When it becomes obvious that someone is threatening Avery, Sin believes it’s for the same reasons he and his partners are interested in her. He follows the twists and turns of the chase and does everything in his power to keep her safe, while fighting to keep the attraction he feels in check. And in the end he realizes that somehow he’s become exactly what he never thought possible…her hero.
more
Amazon Other stores
Bookmark  Rate:

'The Sin Factor' is tagged as:

Similar books to 'The Sin Factor'

Buy 'The Sin Factor' from the following stores: