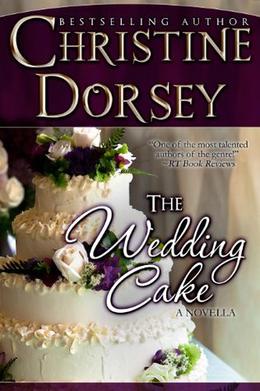 From the sparkling pen of Bestselling Author Christine Dorsey comes another delightful wedding novella, The WEDDING CAKE. This book, which includes the recipe for Cinnamon’s wedding cake, will remind readers why Romantic Times called Christine Dorsey, “one of the most talented authors of the genre”.

What is a wedding without a wedding cake? And if you’re going to have a cake it might as well be the one served at Queen Victoria’s daughter’s wedding. And since Boston heiress, Cinnamon Murphy met her betrothed at Princess Beatrix’s nuptials, she decides to make the cake herself. Never mind that Cinnamon has cooks at her disposal, she is determined to bake the cake herself.

Captain Ian McGreggor has been summoned to the home of his employer, the owner of Murphy Imports and Exports. When a frightened maid squeals that there is a fire in the kitchen, Ian runs below stairs and throws water on the burning pile on the floor and the hem of the cook’s skirt.

Cinnamon realizes the handsome stranger thinks she’s a cook. And though she’s upset that her cake is burned to ashes and that she is wet, she has to admit it was good thing that the man threw water on her smoldering gown. So when he suggests a kiss as payment for helping her, Cinnamon agrees. After all, she’ll never see him again. At least that’s what she thinks. But the Captain and the kiss are hard to forget as Cinnamon continues to try to bake her cake.

Will she manage to bake it? Will the captain decide to give up his life at sea? Will true love win out? Settle back with The Wedding Cake and a cup of tea, and lose yourself in romance.
more
Amazon Other stores
Bookmark  Rate:

'The Wedding Cake' is tagged as:

The 'The Wedding' series

Similar books to 'The Wedding Cake'

The Bride
The Bride
(The Wedding #1)

Buy 'The Wedding Cake' from the following stores: