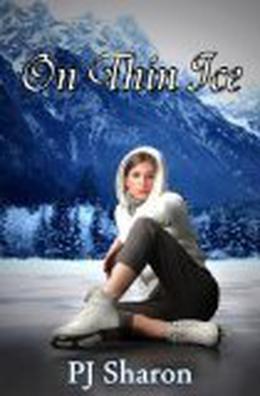 On Thin Ice is about a seventeen-year-old figure skater dealing with her mother’s cancer while trying to live up to the expectations of her family. Penny has to face issues like bulemia, a teenage pregnancy, and family secrets that threaten to change her life forever. The story is a complex, richly woven tale that deals with the consequences of hiding the truth of who we are, and making sacrifices for the ones we love.


Seventeen-year-old figure skater Penny Trudeau has secrets. She’s not perfect, as hard as she tries to be. With a mother who is dying and a father who treats her like she’s invisible, Penny has every reason to lie. To escape the life that is spinning out of control, she falls into the arms of an older boy. But when she lies about her age and he finds out the truth, Penny loses the one good thing that has happened in a long time.


Carter McCray is the hockey hunk she falls for, but Carter has his own family drama, and he’s not looking for trouble. Penny proves to be the exception, until the truth comes out and he can’t get past the betrayal—or her father’s threats.


Can Penny find her way back into Carter’s heart, or will she have to face the harsh realities of life on her own? Penny’s choices lead her down a dangerous road and the secrets she’s keeping will change her world forever.
more
Amazon Other stores
Bookmark  Rate:

'On Thin Ice' is tagged as:

Similar books to 'On Thin Ice'

Buy 'On Thin Ice' from the following stores: