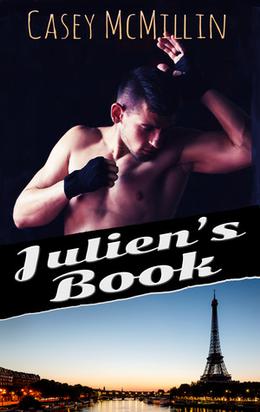 Julien Breaux was completely focused on developing his career as a MMA fighter and kickboxing coach. Shea Miller was an author and new student in his class. She found Julien intriguing and wanted to use him as inspiration for a character in her new book. Seeing no harm in it, Julien happily agreed to serve as her muse.

Shea eventually wrote the book and it became something of a hit in the world of romance novels. Though he had a taste of notoriety, Julien's life seemed to grind along just as it had before he met Shea.

Without warning, Julien was thrust into an extraordinary chain of events—a world where it was hard to separate reality from fiction. One minute he was in total control of his life and the next he felt like a puppet in an elaborate play that had sealed his fate.

Had he really just found the love of his life? And if so, would he need to believe what seemed like the impossible in order to have her?
more
Amazon Other stores
Bookmark  Rate:

'Julien's Book' is tagged as:

All books by Casey McMillin  ❯