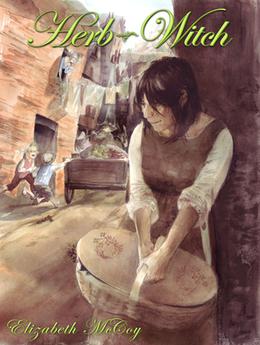 The Lord Alchemist must be immune to hostile potions. But in all the country, there are only two known immunes: Iathor Kymus, the Lord Alchemist, and his feckless brother, Iasen.

Kessa is a half-barbarian herb-witch, arrested for crimes she didn't quite intend. But when Iathor discovers her immunity to truth potions, he'll do whatever he must to court her -- guilty or not, she's his only hope of banishing his nightmare: a son enslaved to him by the loyalty potion that each Lord Alchemist's heir must drink, and defeat.

But Kessa doesn't trust him, Iasen despises her tainted blood, and there's still the mystery of who complicated Kessa's little crime into the bigger one she didn't intend. They don't even have the benefit of lust at first sight. All they have in common is the alchemist's immunity, and an ability to get on each other's nerves. Will it be enough?

All books by Elizabeth McCoy  ❯

Buy 'Herb-Witch' from the following stores: