We Shall Rise (Misfits of the Lore #2) 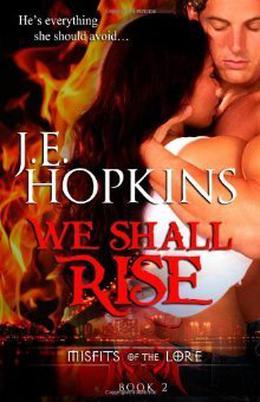 War surrounds him, yet for vampire Kaden Gaspard, there is no greater battle than the one his mind has waged against his heart. He knows he should stay away from her. Reysa. The half-breed vampire warrior who had risked her life to prove his innocence for the seven murders for which he was accused, but had not committed. This stubbornly loyal woman who dedicated her life to her family of misfits - immortals shunned and abandoned by their clans for their impurity of blood and genetic mutations. This courageous and valiant African warrior who Kaden fears could never love the monster that he is destined to be.

As Kaden and Reysa struggle to accept the undeniable bond between them, they must come together to stop the emerging terror that threatens to destroy all immortals. The lesser immortals – witches, sages, shifters, demons, hybrids, charmers and foreseers – have declared war against the pureblood vampires and lycans who have used their purity of blood and greater strength to enslave the weaker races. No immortal is safe. This is a fight for freedom and a fight against genocide. There can be no true victor as death looms for them all.
more
Amazon Other stores
Bookmark  Rate:

'We Shall Rise' is tagged as:

The 'Misfits of the Lore' series

Similar books to 'We Shall Rise'

All books by J.E. Hopkins  ❯

Buy 'We Shall Rise' from the following stores: