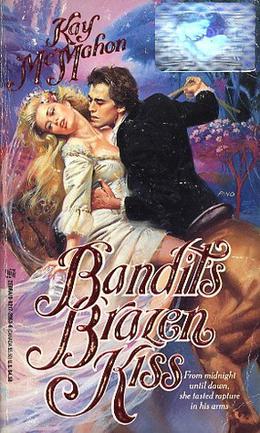 Beautiful, highborn Heather Westbrook had nothing left except her mother's priceless pearls. Her father had gambled away everything he owned, and in one last desperate bet he gambled away Heather's hand in marriage. All she wanted was to escape the clutches of the man who'd won her—and who was waiting to claim her virtue. But as she galloped away another plunderer was lying in wait—dashing highwayman Michael McCord. As the handsome desperado wrenched the valuable pearls from her creamy neck, she felt a wave of hot, scorching heat all through her body. Now she had nothing left to lose. She shuddered as he wrapped her tightly in his embrace, pressed his long lean body against her heated flesh, and devoured her lips with rapturous kisses.

Outrageous highwayman Michael McCord was mildly amused when he first spied the spirited maiden whose carriage he was holding up. Only after she shot the tricorn hat off his head and scared his horse by cracking her whip did he notice her gleaming long blond hair, her silken skin, her luscious curves. He thought he must have died and was standing at heaven's door, lookin in! When he pulled the perfectly matched pearls from Heather's satiny neck, he vowed that he would steal more than the family jewels from this lissome maiden. He would taste her charms and sample her burning kisses, and in a might of ecstasy he would claim a bandit's brazen kiss.
more
Amazon Other stores
Bookmark  Rate:

'Bandit's Brazen Kiss' is tagged as: