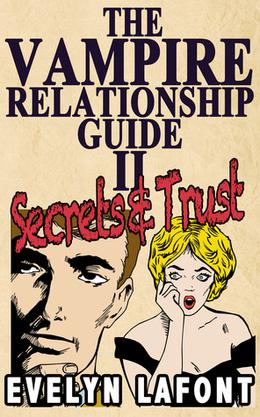 Josie’s come a long way from being an average human chick who just wants to sex-up a vampire. She’s dated, mated, and killed one of the world’s richest vamps and is currently seeing a mysterious, blood-slurping hottie named Walker.

Now, Josie must adjust to the realities of a steady relationship with a vampire, which isn’t all exciting parties, hot sex and moonlit walks. And with a vamp who’s anxious to push their relationship to the next phase as mortality bears down on his human’s fragile body, the pressure for Josie to commit is on.

Can their night-day romance survive leaving Josie’s character and individuality intact, or will the secrets of the supernatural community crush her spirit and her chance at a permanent vampire mate?

WARNING: This is not your regular paranormal romance. This series explores the realities (such as they might be) of humans having relationships with vampires and uses a chick lit style to get there. Oh yeah–and the characters within are fallible and not entirely heroic.

'The Vampire Relationship Guide: Secrets and Trust' is tagged as:

Similar books to 'The Vampire Relationship Guide: Secrets and Trust'

All books by Evelyn Lafont  ❯

Buy 'The Vampire Relationship Guide: Secrets and Trust' from the following stores: