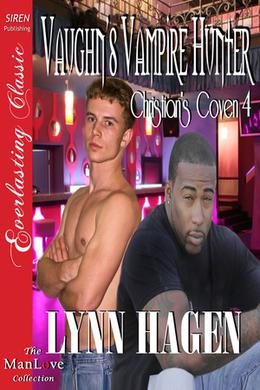 Vaughn lives a carefree life inside the coven and has been known to get kicked out of a place or two for his wild ways. When he spots a man standing in the middle of the club looking lost, Vaughn decides to help the man out, only to realize the innocent farm boy is his mate.

Connor came to the city six months ago. Finding a job was impossible and sleeping in shelters was his only option. When he visits Then Manacle for a hot meal that Jersey had promised him, he stumbles into a world of dark pleasures and sinful delights.

But when Connor discovers vampires truly exist, he freaks out, trying to stake Vaughn in his heart. Can Vaughn convince Connor that vampires aren’t blood thirsty savages and can Vaughn save Connor from the real vampire hunters that are out there?
more
Amazon Other stores
Bookmark  Rate:

'Vaughn's Vampire Hunter' is tagged as: