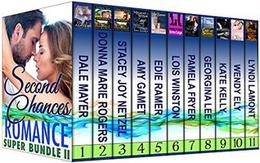 The blockbuster box set with more than 100,000 copies sold is back for more! We've got a lonesome cowboy, a spurned bride-to-be, a heartbroken widower and an unexpected pregnancy, along with a tasty smattering of intrigue, murder and suspense. Almost half a million words and two thousand pages of strong heroes and daring heroines who'll do anything for a second chance at love.

Second Chances —Dale Mayer
Go ahead. Take Charge of your life. Move forward...if you can...
Changing her future means letting go of her past. Karina heads to a weekend seminar and comes face to face with the man she can’t forget. But she soon realizes bigger issues are facing her... And one of them is deadly...

The Perfect Blend —Donna Marie Rogers
Carrie is on the verge of bankruptcy when Matt walks in and offers her unwanted business advice. The rich playboy fled L.A. for the anonymity of small town life and quickly falls for the local coffee shop owner—who’s as infuriating as she is beautiful.

The Heart of the Matter —Stacey Joy Netzel
Heartbroken she can’t have kids, Allie keeps her distance when Rick moves home with an adorable four year-old son who’s as hard to resist as his father. Does she dare take a chance on an impossible dream, or will his desire for more kids devastate their future?

Meghan's Wish —Amy Gamet
Meghan O'Connor returns to the family she ran away from as a teenager, afraid they won't forgive her for leaving town with Liam Wheaton, the boy they tried so hard to keep her away from and the father of her baby. She never expected to find Liam living there, looking sexier than ever and mad as all hell.

Mo's Heart —Edie Ramer
Mo Vincent did the right thing in New Jersey, and it cost him his son, his wife, his restaurant. Now he’s found a home in Miracle, Wisconsin. He should be content...but his heart wants what he can’t have...

The Lost Finder —Pamela Fryer
The first halfway decent guy to come along in eons...and he’s from another planet. Private Investigator Brooke Weaver hopes she can slip into her Oregon hometown, find her client’s missing teenage daughter, and be on her way again before anyone notices. Not likely.

Shattered—Kate Kelly
Failing to save his sister’s life, Jay Rawlings insists he be left alone to live the lonesome cowboy life. But when the woman he once loved returns to his ranch with a killer and the police in hot pursuit, Jay has to face the demons from his past.

In His Embrace—Wendy Ely
When life’s glow threatens to die, love guides the way. Tori expected an ordinary Friday. It wasn’t. Ben’s hand rested on her hip a little longer during their goodbye. Then her tests came back abnormal. Scared and alone, she wishes for Ben’s hand to hold.
more
Amazon Other stores
Bookmark  Rate: