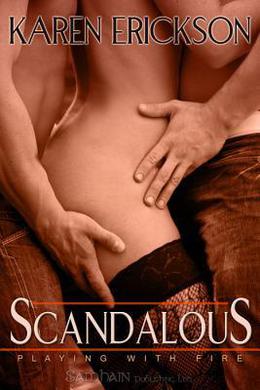 She always got anything she wanted... Playing with Fire 3 A teenage crush on her big brother's boyfriend. It was one of the few times in her spoiled-little-sister life that Alexa had to swallow the word "no." She got over it, or she thought she had-until her brother's wedding brings Eric back into her life, as flirty and fun as ever. It never mattered to her that he's gay. Attraction is attraction. One illicit kiss, and their reconnection blows her mind and rekindles girlish hopes. Then he sets her away from him and runs like hell. Eric can't believe that a woman's touch arouses him. Not just any woman, but sweet Alexa, and he can't help but want more. Desperate to come clean, he confesses all to his steady boyfriend, Brandon, expecting anger. But Brandon's intrigued. He wants to meet the woman who's tied Eric up in knots. With luck, maybe she'll relight the spark between them. Alexa may have lost her chance with Eric, but the consolation prize-a fling with him and Brandon, is too tempting to resist. She never expected to love both men, or to secretly yearn to belong to the one who commands her body like no other... Warning: Contains m/m sex, m/f/m sex, three people confused and in love, a little bit of punishment, a lot of dirty talk and a lot of naughty sex.
more
Amazon Other stores
Bookmark  Rate:

'Scandalous' is tagged as:

The 'Playing With Fire' series

All books by Karen Erickson  ❯

Buy 'Scandalous' from the following stores: