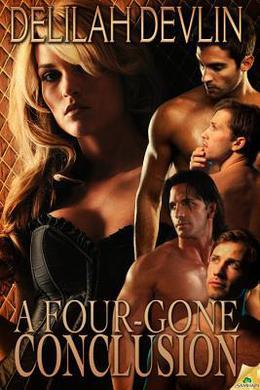 One devilish night…or a chance at heaven?

Sam Logan’s foster sons have a bad rep in Two Mule, Texas. Most of it earned. When it becomes clear they don’t plan on giving up scootin’ after every pretty pair of boots in town anytime soon, he issues the one thing he knows they can’t resist: a challenge. Find a wife.

The oldest, Johnny, is actually grateful. He’s had his eye on Mean Ellie Harker for a long time, and Sam’s challenge is the kick in the pants he needed to ask her out. Except before he can make his move, his brothers kidnap her right out from under his nose. Now, instead of being one question away from victory, he has to compete for the woman of his dreams.

Ellie thought she’d be a dried up old spinster before Johnny finally untangled his tongue long enough to ask for a date. But instead of teaching him better uses for that tongue, his brothers have whisked her away to the ranch. At first she’s furious…then intrigued when she starts to wonder what it might be like to have not just one sexy cowboy dedicated to her pleasure, but four…

Warning: Four handsome cowboys. Four choices. Will it be a single sordid night or a chance at heaven as she savors every luscious inch of the Logan brothers?
more
Amazon Other stores
Bookmark  Rate:

'A Four-Gone Conclusion' is tagged as:

Similar books to 'A Four-Gone Conclusion'

Lawless
Lawless
(Cowboys on the Edge #5)

Buy 'A Four-Gone Conclusion' from the following stores: