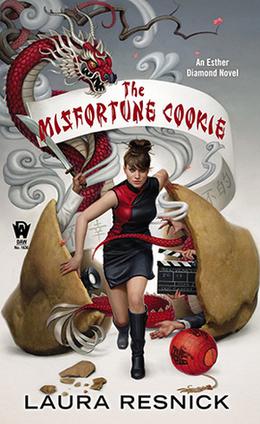 Esther Diamond's year gets off to a rocky start when NYPD's Detective Connor Lopez, who slept with her and then didn't call, shuts down her current place of employment and gets her arrested. Once she's out of handcuffs, and with no paying work on the frigid horizon, Esther takes a small role in a grad student's film project in Chinatown—where her friend semi-retired hit man Lucky Battistuzzi, who escaped Lopez's sweep at the Little Italy restaurant where Esther works between acting jobs, is hiding out in a Chinese-Italian mortuary.

Esther and Lucky soon realize that something strange is going on in Chinatown, where beautifully handcrafted fortune cookies are inflicting deadly mystical curses on the hapless victims who receive them as gifts—and before long, Esther learns that Detective Lopez is one of the recipients. As preparations for Chinese New Year heat up in the ice-covered neighborhood, when the streets will be filled with costumed lion dancers, firecrackers, and dense crowds, Esther and Lucky summon the help of their friend Max, a semi-immortal mage and semi-solvent bookseller, to help them save Chinatown and Lopez (with whom Esther is not on speaking terms) from a mystical murderer of maniacal menace.
more
Amazon Other stores
Bookmark  Rate:

All books by Laura Resnick  ❯