Sealed with a Wish 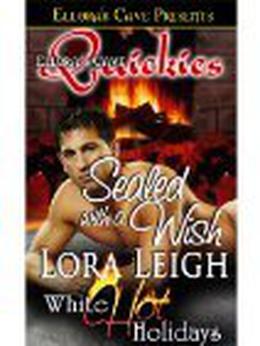 Montgomery, Christmas is just like any other time of year. She'll still be alone.and lonely. And her greatest wish-to have someone to call her own, someone to love-will remain just that, a wish. She's learned the hard way not to ask for things she can't have. And that includes a seemingly persistent sex god in leather who just won't leave her alone. But this is one man who is determined to change her mind. One man who won't take no for an answer. Kheelan Mattero, most trusted warrior of a First Earth prince in exile, is sent to gift Cara for rescuing the prince's son in a brave and selfless move that could have resulted in her own death. But instead, Kheelan finds his own gift-the mate he has searched two planets and a lifetime for. While the hunger rages through him for the pixie-ish Cara, her need must join with his, must equal his, or the bonding will not happen. Now he has to make Cara see that some wishes are worth reaching for.that some wishes can come true.
more
Amazon Other stores
Bookmark  Rate:

'Sealed with a Wish' is tagged as:

Similar books to 'Sealed with a Wish'

Buy 'Sealed with a Wish' from the following stores: