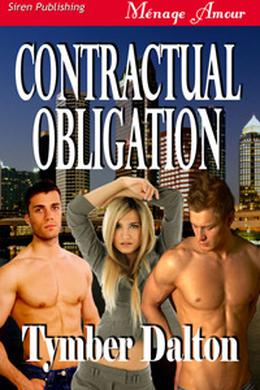 Harper’s father has issued her an ultimatum—quit working herself to death and have fun, or he’ll oust her as CEO of their company. She thinks hiring Doug to be her assistant and play her boyfriend is the answer to all her problems, until she finds out about his secret.

Deep in debt from medical bills, Doug’s parents are losing their home. Going to work for Harper is the answer to Doug’s prayers. Yes, it means pretending to be Harper’s boyfriend. That’s a small price to pay. Unfortunately, it also means he has to say good-bye to Tate, his boyfriend and the man he loves.

Tate doesn’t hate Harper when he finds out why Doug went to work for her—and broke up with him. Can he gain Harper’s trust and convince her Doug had good intentions…and that Doug’s contractual obligation can easily become a two-hunk deal?
more
Amazon Other stores
Bookmark  Rate:

'Contractual Obligation' is tagged as:

All books by Tymber Dalton  ❯