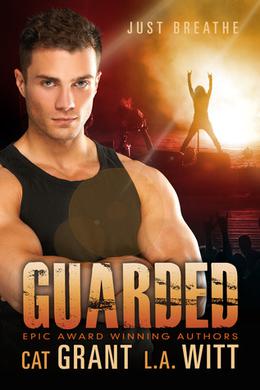 On the surface, rock star Jordan Kane has it all. His band No Rules is burning up the charts and headlining a world tour. His bodyguard doubles as a hot, kinky boyfriend who knows just how to push all his buttons. But behind the scenes, he’s suffocating.

Jase Hewitt never imagined he’d have a shot at bedding the larger than life rock star - never mind dominating him - but now he’s worried he’s in over his head. Jordan’s kinks run deep, dark, and sometimes dangerous, putting Jase’s desires to both pleasure and protect him at odds.

They might have a fighting chance at finding the safe, happy medium between what Jordan needs and what Jase is willing to give, but there’s one problem: Daniel, Jordan’s childhood best friend, the band’s talented guitarist — and a volatile, hard-partying drug addict. Jordan is determined to save Daniel from himself, but Jase has been there, done that, and desperately wants to protect Jordan from the inevitable heartache of watching an addict self-destruct.

When Daniel goes off the rails again, Jordan calls off the tour to get him help. Tension within the band skyrockets and pressure from the record label sends Jordan into a dark spiral. Now his band — and his life — are balanced on a knife's edge, and Jase is the only one who can pull him back... but only if the echoes of his own tragic past don't push him over first.
more
Amazon Other stores
Bookmark  Rate:

'Guarded' is tagged as:

All books by Cat Grant  ❯

Buy 'Guarded' from the following stores: