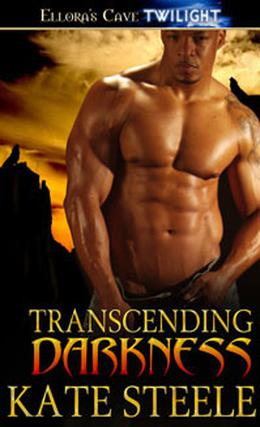 Transcending DarknessKate SteeleThe events in this book follow those in Male of the Species. While it is not necessary to read that book first, it will enhance your enjoyment and understanding of this one.Is it possible to start a new life with a bang...or rather, a spanking?For Owen Connors that's just what it takes. He's about to embark on a journey filled with change, including a new job, a new home and something he never thought he'd have...a man who offers him everything, including the opportunity to become a creature steeped in legend...a werewolf. All Owen has to do is accept Sam's love. Too bad that's an emotion he abandoned a long time ago.For werewolf Sam Sterling, change begins within himself. Vowing never to become like his father, who took pleasure in cruelty and brutality, Sam has learned to be calm, kind and passive. That works just fine for him until he meets the man he would take as his mate. When Owen ignores him in favor of a strong and charismatic alpha werewolf, Sam realizes it's time for a change. For Owen, he'll take charge and become the dominant, decisive lover Owen needs.
more
Amazon Other stores
Bookmark  Rate:

'Transcending Darkness' is tagged as: