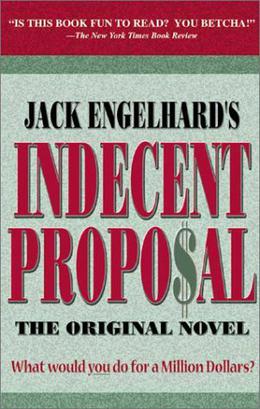 For the newest edition of Indecent Proposal, please visit amazon.com/dp/1771430877


Now on Kindle! Refreshed! Jack Engelhard's "Indecent Proposal" (first published 1988) remains one of the most famous novels around the world. The novel was translated into more than 22 languages and sold millions of copies from continent to continent, establishing it as an international classic.

Hollywood (in 1993) then turned Engelhard's high-concept moral dilemma drama into a box office smash. Over $266 million worth of tickets were sold worldwide from a Paramount movie of the same name starring Robert Redford and Demi Moore.

Though Hollywood only skimmed the surface of Engelhard's masterpiece, the theme is eternal, even biblical - temptation! The plot that has riveted the world's readers and moviegoers? A destitute couple try their luck in an Atlantic City casino. The wife, Joan, is utterly gorgeous. She attracts the attention of an oil rich sultan who can buy anything he sets his eyes on.

Can he buy people? Can he "buy" Joan? To find out, read this Kindle edition of "Indecent Proposal" that has entertained, provoked and captivated millions to this day.

'Indecent Proposal' is tagged as: