The Playboy's Proposition (The Power to Please #2) 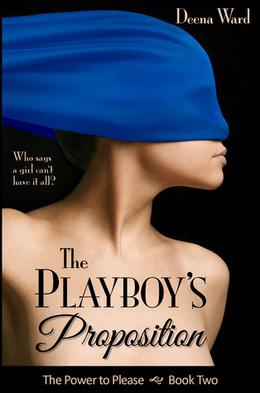 Who says a girl can’t have it all?

She wants to please the charming playboy, but Michael soon proves himself to be a stern taskmaster, pushing her further, faster than she prepared herself to go.

Even while she is drawn more tightly into Michael’s sexual hold, she cannot forget Gibson Reeves, the man who initially set her on this sensual journey. He invades her dreams, as inscrutable and commanding in her fantasies as ever he was in real life.

Soon enough, Nonnie will learn secrets about both men, realize that what seemed a simple decision, was not so simple after all.

And she will have to discover the answer to a difficult question before it’s too late. How far is too far?

*Warning: adult material. This book contains explicit language and scenes of a sexual nature, including exhibitionism, M/f/M, bondage and consensual domination and submission, which some readers may find objectionable.*

After ending her disastrous ten-year marriage, Nonnie finds herself irresistibly drawn by desire. She yearns to submit herself, sexually, to a powerful and dominant male.

Two Doms vie for Nonnie’s submission, the enigmatic Businessman and the charming Playboy. Both men want to guide her sensual journey and lead her to places she never imagined she might go.

Knowing who to trust is always a challenge, and the odds of Nonnie making a mistake are multiplied when she’s gripped by the thrill of new passion. Her choices prove the difference between perfect bliss and utter ruin.

In the end, she must answer a critical question -- in a relationship that’s all about the exchange of power, who holds the ultimate power to please?
more
Amazon Other stores
Bookmark  Rate:

'The Playboy's Proposition' is tagged as:

The 'The Power to Please' series

Similar books to 'The Playboy's Proposition'

All books by Deena Ward  ❯

Buy 'The Playboy's Proposition' from the following stores: