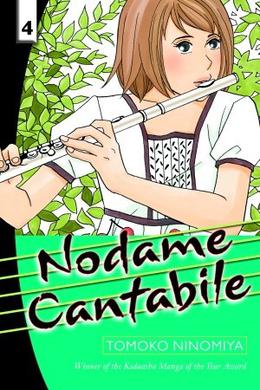 Milch may be down, but he’s definitely not out. In fact, he’s back to take (or is it to force?) the gang to participate in the Nagano Music Festival. In preparation for the festival, the students go to a band camp where they do much more than just play music. Chiaki confronts his fear of the ocean; Mine spends his time getting a tan worth singing about; and Nodame the “orangutan,” after the humiliation of getting kicked out of a master class, gets set to prove that she can really play the piano. There are plenty of high jinks–and nobody gets away unscathed.

Plus, there’s a hilarious extra story that takes us back to Nodame’s childhood, as she drives her piano teacher insane with bad jokes and month-old sandwiches. With Nodame, expect the unexpected from beginning to end!
more
Amazon Other stores
Bookmark  Rate:

'Nodame Cantabile, Vol. 4' is tagged as:

All books by Tomoko Ninomiya  ❯