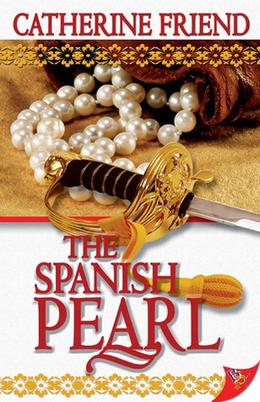 Lesbian adventure romance.
When Kate Vincent and her partner travel to Spain, Kate is accidentally transported back in time...way back in time...to 1085. What does a woman like Kate do in a world of no antibiotics, no feminism, no Diet Coke? She denies it as long as possible, then sets her mind to getting home. Tricky with her now useless twenty-first century skills. Things don't go well. Kate is captured by a band of mercenary soldiers and becomes an unwitting pawn in the violent conflict between the Catholic kings and the Islamic Moors. In her struggle to stay alive and return to the future, Kate must flee exotic harems, filthy dungeons, and treacherous Moorish courts. But when a sword-brandishing woman with an astonishing secret sweeps into Kate's life, Kate is suddenly torn between two women, and between two centuries. The Spanish Pearl is an epic adventure spiced with humor, lust, and danger—a story with surprising twists that will capture your imagination just as Kate's dilemma captures your heart.
more
Amazon Other stores
Bookmark  Rate:

'The Spanish Pearl' is tagged as:

Similar books to 'The Spanish Pearl'

Buy 'The Spanish Pearl' from the following stores: