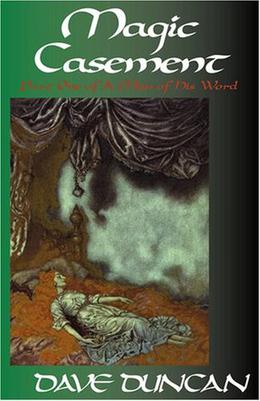 Magic Casement (A Man of His Word #1)

MAN OF HIS WORD A princess and a stableboy? It sounds like the worst sort of hackneyed formula romance. Think again, for "A Man of His Word" may well be the most original fantasy you ever read. The magic is unique and applied in unexpected ways, some of which the late Lester del Rey admitted he had not met in fifty years as writer and editor. The world itself is unique - there are no humans in Pandemia, only imps, elves, gnomes, jotnar, and many more, all of whom you will recognize as "human." MAGIC CASEMENT In MAGIC CASEMENT the tale begins gently, even slowly, with Inosolan enjoying an idyllic childhood in her father's tiny backwater kingdom, too innocent even to understand that the feelings she shares with her friend Rap are more than friendship. Mystery, menace, and the gods appear in short order, and from then on the story grows in scope and power to straddle the world, and adversity thrusts rapid maturity on Rap and Inos. Populated by unforgettable characters - Aunt Kade, Little Chicken, Doctor Sagorn, and many more - Pandemia is an incredible world of credible people and infinite surprises.
more
Bookmark Rate Book
Amazon Other stores

The 'A Man of His Word' series

All books by Dave Duncan  ❯