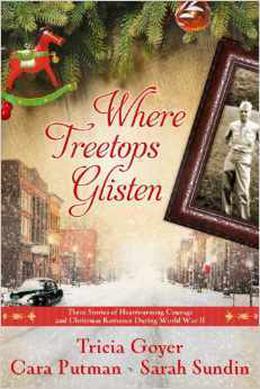 The crunch of newly fallen snow, the weight of wartime

Turn back the clock to a different time, listen to Bing Crosby sing of sleigh bells in the snow, as the realities of America’s involvement in the Second World War change the lives of the Turner family in Lafayette, Indiana.

In White Christmas by Cara Putman , Abigail Turner is holding down the Home Front as a college student and a part-time employee at a one-of-a-kind candy shop. Loss of a beau to the war has Abigail skittish about romantic entanglements—until a hard-working young man with a serious problem needs her help.

Abigail’s brother Pete is a fighter pilot hero returned from the European Theatre in Sarah Sundin’s I’ll Be Home for Christmas , trying to recapture the hope and peace his time at war has eroded. But when he encounters a precocious little girl in need of Pete’s friendship, can he convince her widowed mother that he’s no longer the bully she once knew?

In Tricia Goyer’s Have Yourself a Merry Little Christmas, Meredith Turner, “Merry” to those who know her best, is using her skills as a combat nurse on the frontline in the Netherlands. Halfway around the world from home, Merry never expects to face her deepest betrayal head on, but that’s precisely what God has in mind to redeem her broken heart.

The Turner family believes in God’s providence during such a tumultuous time. Can they absorb the miracle of Christ’s birth and God’s plan for a future?
more
Amazon Other stores
Bookmark  Rate:

'Where Treetops Glisten: Three Stories of Heartwarming Courage and Christmas Romance During World War II' is tagged as:

All books by Tricia Goyer  ❯

Buy 'Where Treetops Glisten: Three Stories of Heartwarming Courage and Christmas Romance During World War II' from the following stores: