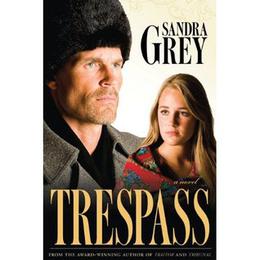 Lieutenant Viktor Rostov warned them not to cross him. If Hans Brenner had listened, Natalie Allred might not have disappeared and Hans might not be lying mortally wounded, his life forfeit to the Soviet MGB. All Hans wanted was to marry his sweetheart in America. But that was before an agreement between Hans and U.S. intelligence goes horribly wrong. Lieutenant Rostov has no choice; with his daughter, Lucya, sentenced to a Siberian death camp in a governmental power play, he must deliver Hans or risk losing Lucya forever. To preserve Lucya's life, Hans must help the Soviets build a bomb, and Natalie must swear allegiance to the motherland and to Rostov himself. Escape seems impossible within the iron grip of the secret police. And when the MGB begins to suspect betrayal, Hans and Natalie's survival will hinge on two people. One must trespass against the laws of a nation that gave him a second chance, and the other must make a heart-wrenching choice: trespass against his country or against his heart.
more
Amazon Other stores
Bookmark  Rate:

'Trespass' is tagged as:

All books by Sandra Grey  ❯

Buy 'Trespass' from the following stores: