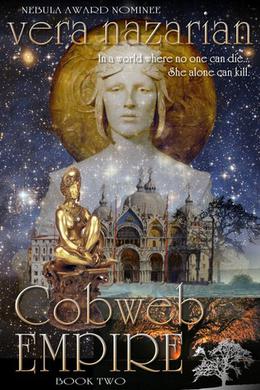 In a world where no one can die, she alone can kill...

Cobweb Empire (Cobweb Bride Trilogy #2) is the second book of the intricate epic fantasy flavored by Renaissance history and the romantic myth of Persephone, about death's ultimatum to the world.

Now that she's Death's Champion, what will Percy do?

In a world where all death and dying has ceased, and only one person can kill, everyone can only expect a miracle. But what if it's just the tip of the iceberg?

Percy Ayren must make her way south, despite all odds, to the place where the death shadow of the Cobweb Bride calls her. With the help of her companions and the invincible black knight, Lord Beltain Chidair whose enigmatic presence disturbs her in a way she cannot explain, Percy must continue her quest, while the mortal world falls apart around them….

Meanwhile, the Marquis Vlau Fiomarre faces the truth of his impossible feelings for Claere Liguon , the Emperor’s daughter. He had cruelly taken her life, and now he must serve her until his last dying breath—it is no longer a matter of honor but secret passion.

And now, the world itself is changing…. A new dark witch rises, and she will make your heart freeze with her beauty and power….

Empires clash, kings and emperors and gods vie for supremacy, the living and the dead are at war, while love stories play out in amazing directions, and new mind-blowing mysteries are born.

'Cobweb Empire' is tagged as: