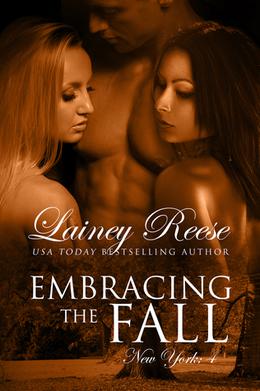 Cami and Ziporah are two girls that couldn’t be more different if they tried. They met as college roommates, forging a friendship that became a lifeline when tragedy struck.

Now as Cami opens herself to reclaim her sexuality, including the possibility that she is a sexual submissive, her fear of the unknown threatens to keep her chained by the past forever.

When Evan moved to New York City on business, the last thing he expected was to have two untrained subs on his hands. Each woman appeals to him in different ways. They pull at his emotions with their vulnerability and challenge his Dominance with their spunk and wit. Evan never dreamt that as he taught their bodies to submit, his heart would be brought to submission by theirs.
more
Amazon Other stores
Bookmark  Rate:

'Embracing the Fall' is tagged as:

Similar books to 'Embracing the Fall'

All books by Lainey Reese  ❯

Buy 'Embracing the Fall' from the following stores: