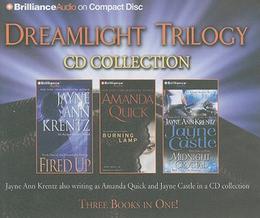 Fired Up (Krentz): More than three centuries ago, Nicholas Winters irrevocably altered his genetic makeup in an obsession-fueled competition with alchemist and Arcane Society founder Sylvester Jones. Jack Winters, descendant of Nicholas, has been experiencing nightmares and blackouts?just the beginning, he believes, of the manifestation of the Winters family curse. The legend says that he must find the Burning Lamp or risk turning into a monster. But he can't do it alone; he needs the help of a woman with the talent to read the lamp's dreamlight. Jack is convinced that private investigator Chloe Harper is that woman. Burning Lamp (Quick): Plagued by hallucinations and nightmares, the notorious crime lord Griffin Winters is convinced he has been struck with the Winters Curse. But even as he arranges a meeting with the mysterious Adelaide Pyne, he has no idea how closely their fates are bound, for she holds the missing lamp in her possession. Midnight Crystal (Castle): Adam Winters is convinced his recent nightmares and hallucinations will lead to him becoming a psychic rogue ? unless he can find a stolen relic and a woman who can read dreamlight. Marlowe Jones rides into his life on a motorcycle and with a dust bunny at her side. Though a descendant of the rival Arcane family, she's just what Adam needs: a psychic private investigator and dreamlight reader extraordinaire.
more
Amazon Other stores
Bookmark Rate Book