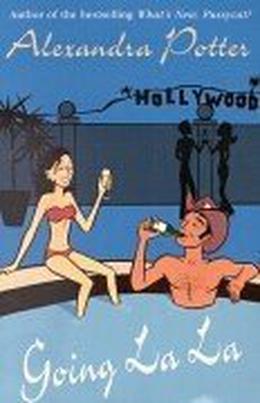 Going La La is a contemporary romance that benefits from its Los Angeles locale, setting it apart from other recently published London-based "chick-lit" and "city-lit" titles. Frankie is 29, happy in her job and thinks she might be about to get married. However, within the space of a week she loses both her job and her potential fiancé and is on a plane, running away to her best friend Rita, who is trying to make it as an actress in LA. Alexandra Potter revels in seeing LA and the Californian lifestyle through Frankie's naïve eyes, detailing the excesses and the absurdities of this image-conscious, sun-blessed, car-driven culture. Through Rita's somewhat nefarious contacts, she and Frankie experience an LA of parties and glamour that many a British visitor to LA could only dream of. However, Potter hams these up to such an extent that they appear as film scenes in their own right, with farcical swimming pool set pieces, obligatory scantily clad women and a whiff of Class A drugs.

Potter has written a classic romance that manages to twist and turn to leave the reader guessing at Frankie's happiness until the very end and has created in her hero and heroine two believable and yet off-kilter characters. Reilly, the love interest, appears as both the uncouth, cowboy-hat-wearing American of stereotype and yet also as the charming gentleman who has experienced pain and needs some love. Frankie, though she has a worrying tendency to relate all her LA experiences to the last two years of her life, (house parties are only comparable to those she went to with her ex-boyfriend, the smarmy Hugh, which feels unrealistic for a 29-year-old, but is perhaps symptomatic of her misguided devotion to her ex), is a sympathetic character and yet beautiful and flighty enough to be the star of her own story.

Going La La offers a dream away from everyday life, where men are Cary-Grant-cum-Marlboro man lookalikes and women are allowed to be swept off their kitten-heeled feet (while also becoming leather-trouser-wearing independent sex-bombs). Frankie rejects drab and oh-so-British-London and her equally drab and oh-so-British boyfriend, embracing sunny Los Angeles and Reilly with his "long, lazy smile"--something we'd all like to do, at least for one day, as we read this and smile on a cold, rainy Sunday morning. --Olivia Dickinson

'Going La La' is tagged as:

All books by Alexandra Potter  ❯