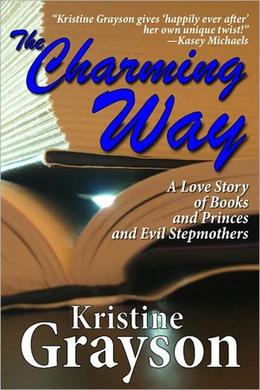 Mellie has a secret: she blames fairy tales for ruining her life. She believes she can stop fairy tales from ruining other people’s lives by forcing booksellers to stop selling fairy tales. But on the way to her protest at a book fair, she runs into a handsome man. A very handsome man who isn’t just her Prince Charming—he’s THE Prince Charming. And he loves books. Even fairy tales. The short story that provided the inspiration for Grayson’s paranormal romance novel, Wickedly Charming.

“With her series of magical romances, Kristine Grayson has carved out her own special and unique place in the romance genre.”
—Romantic Times

Called “The Reigning Queen of Paranormal Romance” by Best Reviews, Kristine Grayson has made a name for herself publishing light, slightly off-skew romance novels about Greek Gods, fairy tale characters, and the modern world. Her novel, Utterly Charming, won the Romantic Times Reviewer’s Choice Award. Her novel Wickedly Charming, which will appear in May of 2011, is based on “The Charming Way.”
more
Amazon Other stores
Bookmark  Rate:

'The Charming Way' is tagged as:

Similar books to 'The Charming Way'

Buy 'The Charming Way' from the following stores: