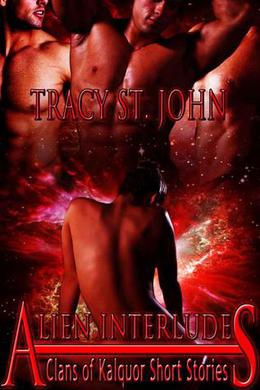 Clans of Kalquor short story collection. Nine tales revisiting the alien clans and their Earther mates:
Hunted - Amelia Ryan is stalked through the Kalquorian wilderness by a dangerous Nobek with no chance for escape.
Abduction – Rebellion is brewing on Kalquor, and Empress Jessica is the insurgents’ latest target.
The Negotiation – Saucin Israla must deal with Earther Colonel Tyler Carter, a man whose threat involves her heart.
Michaela’s Child – Michaela Blake finally has a child of her own, but how will she regain her clan?
The Sentence – Cassidy Hamilton’s grandfather faces a sentence worse than death for his part in Armageddon.
A Family Affair – A clandestine tryst re-opens old wounds for the Imperial Family.
An Improper Proposal – Lindsey McInness’ clan’s homecoming is marred by the machinations of a greedy councilman.
Sins of the Past – Imdiko Krijero and Nobek Wynhod’s past may cost Dani Watson her life.
Prelude to Redemption – Young Dramok Sojan finds more than he bargained for in the ruins of an Earther women’s prison: broken but unbowed revolutionary Rachel Hicks.

'Alien Interludes' is tagged as:

The 'Clans of Kalquor' series