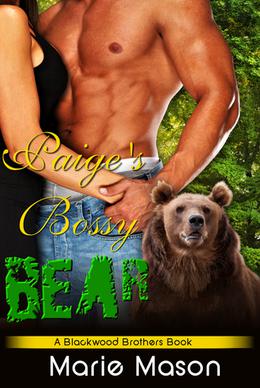 They said the road to true love could be rocky. Quinn’s courtship of Paige was covered with huge freaking boulders!

Paige Matthews had finally found her one true love, a bear shifter named Quinn Blackwood. Raised by an elderly aunt, she has never relied on anyone for anything. Adjusting to a big bear shifter—a big, bossy, bear shifter—was taking some getting used to. Especially, when he insisted they move in together. She didn't know why she was hesitating. Fate had given her everything she’d ever desired. What it hadn't done was provide an instruction manual on how to handle her alpha male bear.

One blind date had revealed Paige was indeed Quinn Blackwood's true mate and he couldn't be happier with the curvy beauty. Circumstances had placed her in danger and his bear on the edge. Now that the danger had passed, the man—and the bear—was having a difficult time giving her the space she needed.

Perhaps it was time to toss her over his shoulder and show her just how bossy this bear could be.
more
Amazon Other stores
Bookmark  Rate:

'Paige's Bossy Bear' is tagged as:

All books by Marie Mason  ❯