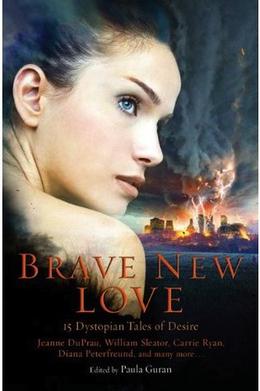 Young love has always had its challenges, but even so, the world falling apart at its seams is a pretty big obstacle. This stellar collection of YA dystopian tales explores survival of the fittest in terms of love, passion, and humanity. When the survival of the human race is at stake, what will it take for the bond between two people to hold strong together? Featuring some of the most well known and best-selling names of the dystopian genre, as well as the hottest up-and-coming authors, this anthology includes works from Jeanne DuPrau ( City of Ember ), Kiera Cass ( The Selection ), William Sleator ( Interstellar Pig ), Jesse Karp ( Those That Wake ), Diana Peterfreund ( Secret Society Girl ), Carrie Vaughn ( The Kitty Norville Series), and Carrie Ryan ( New York Times bestseller The Forest of Hands and Teeth ).


Contents:
Hidden Ribbon by John Shirley
The Salt Sea and the Sky by Elizabeth Bear
In the Clearing by Kiera Cass
Otherwise by Nisi Shawl
Now Purple With Love's Wound by Carrie Vaughn
Berserker Eyes by Maria V. Snyder
Arose from Poetry by Steve Berman
Red by Amanda Downum
Foundlings by Diana Peterfreund
Seekers in the City by Jeanne DuPrau
The Up by Nina Kiriki Hoffman
The Dream Eater by Carrie Ryan
357 by Jesse Karp
Eric and Pan by William Sleator
The Empty Pocket by Seth Cadin

'Brave New Love: 15 Dystopian Tales of Desire' is tagged as: