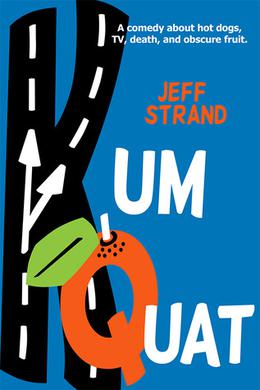 "Strand creates two endearing characters and infuses their relationship with an unexpected depth, humanity and tenderness, while managing to keep it grounded in reality with wicked humor." -- Examiner.com
From the "wickedly funny" Jeff Strand (says Publishers Weekly) comes a comedy about love, death, hot dogs, TV, and obscure fruit.

Thirty-five-year-old introvert Todd Bryan hasn't really done much with his life, and he's okay with that. Until, at a painfully bad film festival, he meets Amy Husk. She's attractive. She's funny. She's quirky. And...she has an inoperable brain aneurysm and not much time to live. She may not even make it to the long-awaited final episode of EXIT RED, the Greatest. Show. Ever.

She convinces him that they should do something crazy and frivolous. And suddenly Todd, a guy who doesn't do spontaneity, is on an insane road trip from Florida to Rhode Island with a woman he barely knows, just to visit a really cool hot dog place.

Many things will go wrong. But, hey, many things will go right, too. There's a hook-handed hitchhiker and some property destruction. Maybe some sex. A kumquat will probably be relevant at some point, although not during the sex (if there is any).

A laugh-out-loud comedy, a touching love story, and a cross-country adventure, KUMQUAT is a story about making the most out of the time you've got.

'Kumquat' is tagged as:

All books by Jeff Strand  ❯

Buy 'Kumquat' from the following stores: