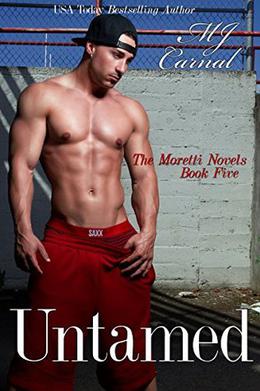 Steve Wainwright is broken. After catching his fiancé in bed with his radio co-host, he vows to never let anyone in again. But sometimes fate has other plans. Lily Ann Lee is going through a crisis of her own and turns to Steve for help. Their friendship is instant and something they both treasure. Just as Steve is beginning to question his feelings for her, a ghost from his past takes center stage and tries to sweep Lily off her feet. Steve has a choice to make. If he fights for her, he could lose the person from his past that meant the most to him. If he lets her go, he could face a lifetime of regret. Sometimes saying goodbye is the only option. When a freak accident threatens to change the lives of the Moretti men, Steve is forced to question everything about the future. Will Steve’s past come back to haunt him? Will he find his way back to Lily? Or will Steve’s heart always remain untamed?

Join in the journey as we say goodbye to the Moretti family in the fifth and final Moretti Novel by MJ Carnal.
more
Amazon Other stores
Bookmark  Rate:

All books by M.J. Carnal  ❯