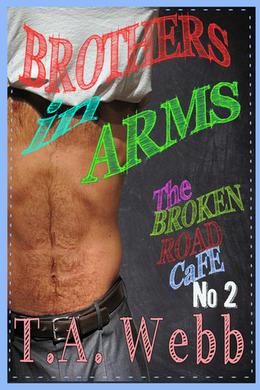 Betrayed on every front, Dan O’Leary cashed in all his chips and moved from the big city life of Atlanta to small town Blue Ridge, Georgia. While licking his wounds, he never meant to start a new relationship, especially with closeted Chief of Police Nick Oliver.

But now all Dan’s hot buttons are being pushed. One of his employees is being terrorized by seemingly upstanding townspeople. Then worst of all, he’d promised himself he’d never be anyone’s dirty little secret, and when Nick’s fear of being outed causes him to hurt Dan, Dan knows there’re problems in paradise.

With trouble on all sides—a homophobic football coach, an ex lover, and his former best friend—it takes a shot in the dark before he realizes the real danger. It’s time for Dan to figure out who he can trust and close ranks with his brothers in arms.
more
Amazon Other stores
Bookmark  Rate:

'Brothers in Arms' is tagged as:

The 'The Broken Road Cafe' series

Similar books to 'Brothers in Arms'

Buy 'Brothers in Arms' from the following stores: