Heir Of The Wolf That Bit You (Wolf Haven #1) 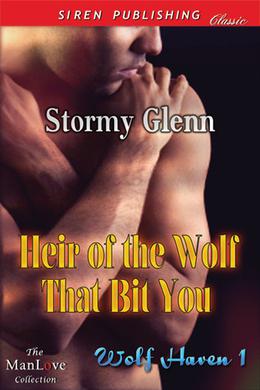 Matthew Jackson’s life just went from somewhat normal to a Hollywood horror movie, and just because he spent one weekend with the man of his dreams. It would be spectacular if that man was still around, but Rico Sullivan had split without a word. Now, Matty is left to deal with the aftereffects of their weekend of bliss together all by himself.

Getting dragged into a world he knew nothing about, Matty has to rely on complete strangers to keep him safe. When he finally does find Rico, life doesn’t get any better. For one, Rico thinks he’s insane. And for two, the same people that are after Rico have put Matty on their kill-on-sight list.

Matty and Rico are on the run from hunters out to execute them because they have violated shifter law by falling for each other. Escaping them would be a lot easier if they knew who they could trust or where they might find a safe haven. Until they do, they only have themselves to rely on…and the strange abilities Matty seems to be developing.
more
Amazon Other stores
Bookmark  Rate:

'Heir Of The Wolf That Bit You' is tagged as:

Similar books to 'Heir Of The Wolf That Bit You'

More books like 'Heir Of The Wolf That Bit You'   ❯

Buy 'Heir Of The Wolf That Bit You' from the following stores: