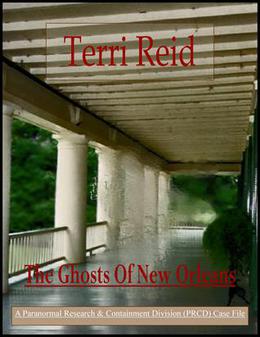 After a Category Five Hurricane has ravaged the coastline of Louisiana, Eloise Parker, an agent for the PRCD, is called in to locate any displaced spirits and guide them on. Powerful forces employ the “Old Magic” of New Orleans in an attempt to thwart her efforts and end her life. Eloise is familiar with this kind of mission, having worked on disasters throughout the world. But the evil she encounters in New Orleans, both human and paranormal, will force her to rethink her abilities and rely on faith.

The Paranormal Research and Containment Division (PRCD) is a covert agency under the auspices of the Department of Defense, whose mission is to investigate paranormal incidents and maintain public safety. PRCD units are often sent in after catastrophic events occur to help spirits bound to the place of death move to the next life. This “cleansing” opens the area for future human residents without residual paranormal sensations.
more
Amazon Other stores
Bookmark  Rate:

'The Ghosts Of New Orleans (A Paranormal Research & Containment Division (PRCD) Case File #1)' is tagged as: