by Connie May Fowler 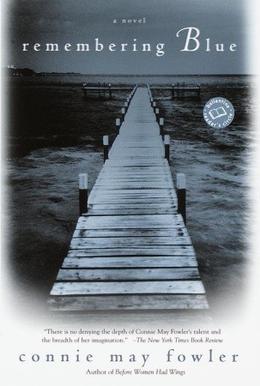 Emotionally neglected by her mother, abandoned by her father, Mattie O’Rourke spent her childhood starved for the one thing she thought she’d never find: love. When her mother dies and, at twenty-two, she finds herself completely without ties of any kind, Mattie takes a chance at ending her loneliness and moves to a tiny coastal Florida town. At the Suwannee Swifty convenience store, a sea change envelops her. Mattie O’Rourke sees Proteus Nicholas Blue and their fate is sealed after only a few shy, stolen glances.

Nick walks into Mattie’s life having fled his own. A lifelong fisherman from a remote island off the coast, Nick is haunted by the certain knowledge that the sea will be the death of him (as it has been for all the Blue men) and he has resolved to leave it behind. But as Nick and Mattie settle into an intimacy that both comforts and surprises them, Nick feels the inextricable pull of the waxing moon’s tide and the siren’s call of the dolphins that, Blue legend has it, are his brethren.

And so it is that Mattie, who only months before felt that happiness would never find her, returns with Nick to the island home that nurtured him and finds herself embraced by a large and loving family and an alluring and sensual landscape. Life on Lethe is transforming for Mattie. But Nick always knew that the sea would claim him, and all of Mattie’s love cannot prevent the tragedy that is their destiny.

Moving and enchanting, Remembering Blue is a lush story of love, loss, and the mythic power of the ocean, told in an elegant and passionate voice that could only come from Connie May Fowler.
more
Amazon Other stores
Bookmark  Rate:

'Remembering Blue' is tagged as:

Recent books by Connie May Fowler