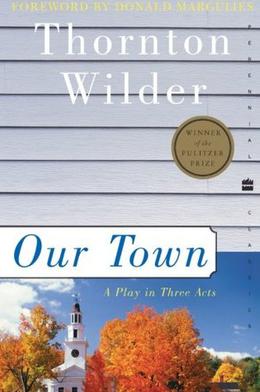 Our Town was first produced and published in 1938 to wide acclaim. This Pulitzer Prize–winning drama of life in the town of Grover 's Corners, an allegorical representation of all life, has become a classic. It is Thornton Wilder's most renowned and most frequently performed play.

It is now reissued in this handsome hardcover edition, featuring a new Foreword by Donald Margulies, who writes, "You are holding in your hands a great American play. Possibly the great American play." In addition, Tappan Wilder has written an eye-opening new Afterword, which includes Thornton Wilder's unpublished notes and other illuminating photographs and documentary material.
more
Amazon Other stores
Bookmark  Rate:

'Our Town' is tagged as:

Similar books to 'Our Town'

Our Town
Our Town
All books by Thornton Wilder  ❯

Buy 'Our Town' from the following stores: