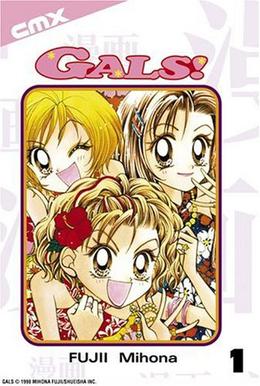 One of the top girls in Shibuya, Tokyo, is 16-year-old Kotobuki Ran. Burdened by a family full of police officers who pressure her to follow in their footsteps, Ran has turned to the kogal lifestyle out of rebellion, vowing to stay tanned and bleached until her parents get off her case. Stubborn, sassy, and sometimes savage, Ran has already made a rep for herself as the "bull in Shibuya's china shop." In fact, the only thing saving rambunctious Ran from a run-in with the law is her big brother, Officer Kotobuki Yamato, luckily stationed in Shibuya where he can keep a watchful eye on his sister. But despite herself, Ran has inherited some of her family's sense of justice and civic duty. She gives romantic counsel to a reformed kogal, Miyu, who is smitten with the more mature Officer Yamato. Ran also tries to save fellow classmates from the perils of teenage prostitution, shoplifting and other dangers faced by Gals!
more
Amazon Other stores
Bookmark  Rate:

All books by Mihona Fujii  ❯