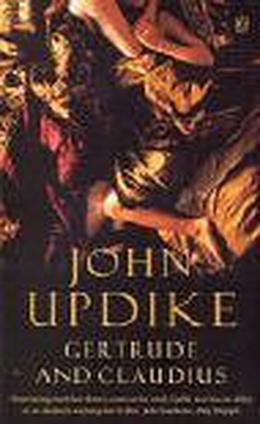 Borrowing a phrase from Hamlet for the title of his 1999 nonfiction collection, John Updike may perhaps have been dropping hints about his fictional work in progress. He has, in any case, now delivered Gertrude and Claudius --and his variation on what is arguably the Bard's greatest hit sits very handsomely in the Shakespearean shadows. As its title suggests, this is a prelude to the actual play, focusing not on the sulky star but on his mother and fratricidal stepfather (think of it as a Danish, death-struck version of The Parent Trap ). Updike's great achievement here is to turn our customary sympathies on their heads. This time around, Gertrude is a decent, long-suffering wife, whose consciousness happens to be raised to the boiling point by her sexy brother-in-law. And Claudius, too, seems half a victim of this fatal attraction, with a strong neo-Platonic accent to his lust:

The amused play of her mouth and eyes, the casual music of her considerate voice, a glimpse of her bare feet and rosy morning languor were to him amorous nutrition enough: at this delicate stage the image of more would have revolted him.... What we love, he understood from the poetry of Provence, where his restless freelancing had more than once taken him, is less the gift bestowed, the moon-mottled nakedness and wet-socketed submission, than the Heavenly graciousness of bestowal.

Subtract the poetry (and leave in the wet-socket business) and we're not too far from Rabbit Angstrom. As in the bulk of his fiction--and most conspicuously in the underrated In the Beauty of the Lilies --Updike sacrifices artistic firepower when he goes archaic on us. That explains why Gertrude and Claudius gets off to a wobbly start, with the author's medieval diction careening all over the page. But once his narrative gets up to speed, Updike dispenses one brilliant bit of perception after another. Note, for example, Ophelia's teeth, "given an almost infantile roundness by her low, palely pink gums, and tilted very slightly inward, so her smile imparted a glimmering impression of coyness, with even something light-heartedly wanton about it." Who else could make mere dentition such a window into the soul?

Gertrude and Claudius also amounts to a running theological argument, in which men constantly impale themselves on metaphysical principle while the adulterous queen is willing "to accept the world at face value, as a miracle daily renewed." (That would explain Gertrude's snap diagnosis of her neurotic son: "Too much German philosophy.") A superlative satellite to Shakespeare's creation, Updike's novel is likely to retain a kind of subordinate rank, even within his own capacious body of work. Still, it's packed with enough post-Elizabethan insight about men and women, parents and children, to suggest that the play's not the thing--not always, anyway. --James Marcus

Similar books to 'Gertrude And Claudius'

Buy 'Gertrude And Claudius' from the following stores: