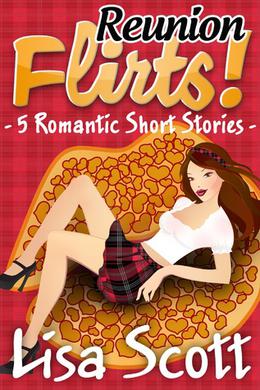 Where do you find secret crushes, old flames, and regret galore? At any class reunion, of course. Reunion Flirts! features five sweet, funny, romantic short stories, set at a ten-year high school reunion.
Each story is 9,000-12,000 words in length (technically, a novelette, but short story has a better ring.) These stories stand alone, but when read as a collection, they link together.
The stories include:

"Second Chance" (11,000 words)
Chelsea Hallman’s ex-boyfriend, Tripp McCall, is now a rich business tycoon, and she wants him back. Not for his money, but for his humor, his kindness, and his mesmerizing gray eyes. But when he offers to help organize their ten-year class reunion, Chelsea suspects he’s just trying to show her what she lost. Could he ever give her a second chance?

"Class Flirt" (10,000 words)
Martina Klein has worked hard to put the title of Class Flirt behind her, and she’s determined to show her classmates they were wrong about her. She brings her conservative co-worker Jackson along as the perfect date. When she arrives, old rumors start flying, and soon she only cares about one person’s opinion—Jackson’s. Could he ever be with her now that he knows the truth about her past?

"Crush" (12,000 words)
Cathy Blake has lusted over Peter Schmidt since freshman year, and she’s finally going to tell him how she feels at their ten-year high school reunion. But Cathy doesn’t know someone’s had a crush on her for years. And when Danny Patel shows up to confess his feelings to her, Cathy has to question what she really wants.

"My Best Friend's Girlfriend" (9,000 words)
Tate has secretly loved his best friend’s girlfriend, Alyssa, even before the two of them started dating. Now that they’re divorced, Tate’s wondering if it’s finally his chance to tell Alyssa the truth. Can Alyssa ever see him as more than a friend?

"Homecoming Queen" (12,000 words)
Country music star Lucy Jordan has no desire to come back to her ten-year high school reunion. The jerks in her class voted her Homecoming Queen as a joke. Plus, Lucy’s life is more screwed up than a sad country song. But she sneaks into the reunion to honor the memory of her late friend. And what she learns changes everything about her past and the possibilities for the future.
more
Amazon Other stores
Bookmark Rate Book