Burke, The Kingpin (The Shamrock Trinity, #3) 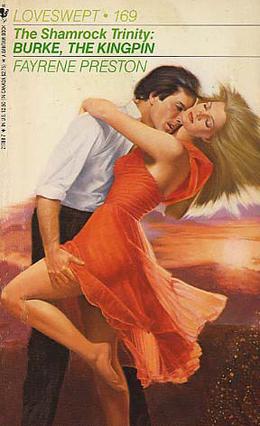 Cara Winston appeared as a fantasy, racing on horseback to catch the day's last light -- her silver hair glistening, her dress the color of the Arizona sunset...and Burke Delaney wanted her. She was on his horse, on his land: she would have to belong to him too. But Cara was quicksilver, impossible to hold, a wild creature whose scent was midnight flowers and sweet grass. Burke had always taken what he wanted, by willing it or fighting for it; Cara cherished her freedom and refused to believe his love would last. Could he make her see he'd captured her to have and hold forever?
more
Amazon Other stores
Bookmark  Rate:

'Burke, The Kingpin' is tagged as:

The 'The Shamrock Trinity,' series

Similar books to 'Burke, The Kingpin'

All books by Fayrene Preston  ❯

Buy 'Burke, The Kingpin' from the following stores: