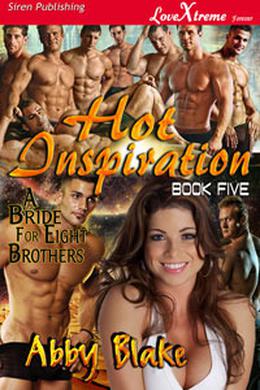 Mikayla and her husbands’ new contract is on a desert planet that already has a small, well-established colony, and Mikayla is eager to sample the local markets. Despite the beautiful landscape, varied wildlife and sensually inspiring heat, things don’t seem quite right. Polygamy is legal for both sexes, but it seems that only the men in this community have multiple partners. Determined to protect their wife, Mikayla’s husbands try to limit her exposure to the local culture.

However, Bryce needs his leg fixed, so Mikayla and Matt finally convince him to get the surgery done. But while waiting for his brother to wake up, Lachlan witnesses a vicious assault on a young woman and steps in to help. Unfortunately, his act of compassion leaves him a target for the more fanatical occupants of this planet.

Will protecting a stranger cost Mikayla and her husbands more than they’re willing to pay?
more
Amazon Other stores
Bookmark  Rate:

'Hot Inspiration' is tagged as:

The 'A Bride for Eight Brothers' series

All books by Abby Blake  ❯