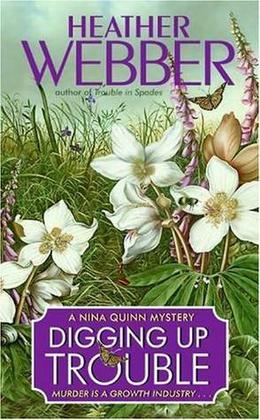 Digging Her Own Grave

Landscaper Nina Quinn makes her living from surprise garden makeovers. It's not her fault that someone duped her into digging up the wrong yard. And she certainly can't be blamed when her handiwork turns the unsuspecting real owner apoplectic and he drops dead from a heart attack . . . can she? Nina's got enough trouble already, with her divorce from faithless hubby Kevin nearing completion and her unruly stepson up to his teenage neck in possibly illegal mischief. Now she's in danger of losing her business! But there's something screwy about this rather convenient "accidental" death of a man whom apparently no one could stand -- not even the "grieving" widow who's threatening to sue Nina's overalls off. To save her livelihood -- and her skin -- Nina's going to have to dig deeper into the dirt than she ever has before . . . and see what sort of slimy secret things crawl out.
more
Amazon Other stores
Bookmark  Rate:

'Digging Up Trouble' is tagged as:

The 'A Nina Quinn Mystery' series

Similar books to 'Digging Up Trouble'

All books by Heather Webber  ❯

Buy 'Digging Up Trouble' from the following stores: