Truth and Seduction (The Callens #2) 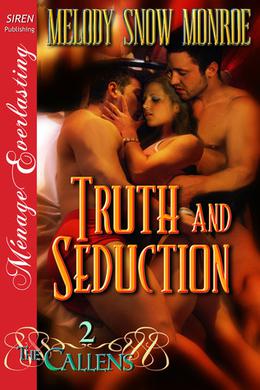 Sexy television investigative reporter, Jessie McCallister has returned to Temptation, Wyoming after eleven years and wants it all—her career and her two high school dream men, hunky newspaper mogul, Cody Callen, and hot arson investigator, Shane McKee. After she watches these brave men save a young boy from a burning building, she knows these heroes are still the ones for her.

As the three of them investigate the fire and share information, they connect on an emotional and sexual level. However, after Jessie agrees not to expose the possible identity of the arsonist because it may harm the station’s bottom line, Cody’s and Shane’s rock solid belief in telling the truth forces them to set her free. What does she have to do to win back their respect and love?
more
Amazon Other stores
Bookmark  Rate:

'Truth and Seduction' is tagged as:

The 'The Callens' series

Similar books to 'Truth and Seduction'

Buy 'Truth and Seduction' from the following stores: